We went to an Agir concert a while back and it was at the Teatro Capitolio.

Are you familiar with the theatre?  It has a storied history and is a tribute to yesteryear Portugal.  It is in Parque Mayer, the theatre district.  Lets check it out!!

Some aspects of the theatre:

-social issues over the years 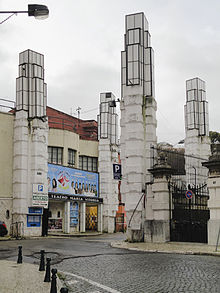 “Parque Mayer is a theatrical and entertainment district in the Portuguese capital of Lisbon. Originally created as a summer amusement park, it at one time had four theatres, although one was demolished in 2015 and another has not been used since 1992. Successive proposals have been made for upgrading the area, but none has yet come to fruition.[1][2]”

In July 1922, Teatro Maria Vitória, the first theatre in Parque Mayer, was opened. This theatre continues to function, despite having been almost destroyed by a fire in 1986.[3][4] This was followed in 1926 by the Teatro Variedades, which still exists but has not been used since 1992.[5] Restoration work was due to begin in late 2020.[6] In 1966, this theatre also suffered a fire. Both of these theatres offered what is known in Portugal as Teatro de Revista (Magazine shows), or revues).[1][2]

Two other theatres were subsequently added. The Teatro Capitólio, which had a modernist design was opened in 1931. The Capitólio offered serious theatre as well as films. In time, it became known for showing pornographic films, including the first Portuguese screening of Deep Throat.[7][8] The last theatre to be built, Teatro ABC, which was opened in 1956, was also the first to be definitively closed, being demolished in 2015. This was also used primarily for Teatro de Revista shows.[1][2][9]” (Teatro de Revista- In general terms, it consists of several scenes of comic, satirical and political and social criticism, with musical numbers. It is also characterized by a certain Kitsch tone – with dancers dressed in a more or less exuberant way (feathers and sequins)-pt.wikipedia.org/wiki/Teatro_de_revista)

At the end of the 1970s, the area began to decline in the face of television and alternative entertainment opportunities. Having always had different types of activities to offer its visitors, it lost this diversity and became known primarily for the theatres offering revue or variety shows. With the degradation of these buildings, it became a rather unattractive place to visit. [1][2][6]”

Due to lack of maintenance the Capitólio became visibly degraded in the 1980s. Several attempts were made to rescue it but in the early 2000s it was proposed to demolish the theatre and replace it with a new performing arts centre, to be designed by the Canadian-American architect Frank Gehry. This idea provoked controversy and was eventually dropped, mainly as a result of the efforts of “Citizens for Capitólio”, which argued that the existing building should be restored. The building was included on the 2006 World Monuments Watch list of the 100 most endangered sites in 2006, drawing international attention to the condition of the structure.[1][3]

In December 2007, the Lisbon City Council approved the restoration of the Parque Mayer district and of the theatre. Work on the Capitólio would address the structural water damage and return the building to its original design. The work, which began in the first quarter of 2010, cost around 10 million Euros, part of which was funded by the Casino Lisboa. Prior to the work beginning, it was agreed to give the theatre the name of the actor Raul Solnado, who had died in August 2009. The rehabilitated theatre was opened in November 2016, equipped with up-to-date stage, sound, and screen technologies and addressing modern safety standards. The main hall has 400 movable seats and can accommodate up to 1000 people standing. The architect for the renovation, Alberto de Souza Oliveira, received the 2016 Valmor and Municipal Architecture Prize for his work.[4][5][6]”

See various links below to see the inside of the Teatro Capitólio.  Click and view.

We're not around right now. But you can send us an email and we'll get back to you, asap.